The House Of Pop

The December Streets are starting off their new musical era with a bang! Their latest single ‘Same Faces’ became a radio hit here in...
Read more

As matric students get their results this week, we’ve seen what an important role education plays in our society. It’s a fundamental pillar that has a massive ability to change the world.

In July 2021, the education landscape was disrupted by the news that the University of Cape Town & education technology partner Valenture Institute collaborated to launch the UCT Online High School – an innovative, new online high school created to accelerate access to world-class high school education and unleash South Africa’s, and Africa’s full potential. The University of Cape Town is the first university on the African continent to achieve such a feat, and the public response to date has been nothing short of unbelievable – over 10,000 learner applications and the first cohort of 5,000 learners in 2022.

In continuation of this innovation and success, the UCT Online High School endeavored to up the ante and create another first – the first-ever school song created by South Africa’s (and Africa’s) top award-winning artists. The collaboration, dubbed ‘We Own The Future’ — after a learner-wide name vote confirmed this name as the frontrunner — is a one-of-a-kind anthem created to inspire, motivate and bring together Africa’s youth to unleash their potential and encourage a sense of community for an online cohort of learners across South Africa and the globe. The launch of the ‘We Own The Future’ school song and music video today coincides with 24 January’s International Day of Education, and is a celebration of aspirational talent for those in need of encouragement and motivation through the power of music.

Sharing her excitement, ‘“This is perhaps one of the most inspiring songs I have heard in my entire life. I would have loved to have such an affirming school song growing up, it is a reminder of what is possible, what to aspire to and every time we sing this song we are reminded that our learners not only have a place in the future but that they own the future!’, says Yandiswa Xhakaza, UCT Online High School’s first Director & Principal.

Collaborating on the school anthem are African music’s finest group of artists, all award-winning on multiple platforms, garnering many radio hits throughout their careers, and most importantly – true ambassadors of their generation and mentors for Africa’s youth in the sense that success is possible, no matter your circumstance, with the right foundations and mentors – anything is possible! 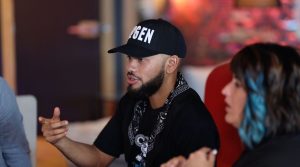 Kicking off the collaboration is Cape Town’s SAMA-winning live-electronic music trio, GoodLuck, who are one of SA’s most successful global touring exports with multiple number 1 radio hits, and a penchant to use their music as a force for good. GoodLuck’s Ben Peters was the lead-producer on the collaboration and co-writer along with Jules Harding, the band’s lead vocalist, who calls on the youth to ‘open their hearts, open their minds’ for their new chosen path of online schooling. ‘It was such a joy for us to create this song in the spirit of learning with some of the most exciting artists in South Africa. To be able to inspire learners to reach higher within a new lane of schooling that is exciting and progressive is a massive honour for us. We can’t wait for the world to hear what we have created with Msaki, YoungstaCPT and Shekhinah as our gift to the next generation of inspired youth.’, says Jules Harding.

Durban’s multi-award winning Pop/R&B vocalist and songwriter, Shekhinah — who in 2016 was nominated for an MTV European Music Award for Best African Act — adds her soulful voice & lyrical verse to the collaboration encouraging the youth to ‘break the mould, and grow from it’ for a dream future.

Adding the rap flavour and hailing from Cape Town — regarded as one of the most influential South African emcees of this generation & dubbed the ‘King of Street Rap’ by CNN’s Inside Africa — is YoungstaCPT, who adds his well-known lyrical mastery offering solid advice to the youth from his perspective and that the ‘Sky’s the limit’. ‘Getting to work with artists I’ve always looked up to and admired for the 1st time. I absorbed a lot from both artists during the creative process so it was a good learning experience for me’, says YoungstaCPT.

Last but not least, the incomparable lyrical songstress and East London born vocalist, Msaki — adding her vocals in isiXhosa and upping the song’s African roots — who creates a melodic verse appealing to the younger generation to ‘shine, to think for themselves as the independent youth, and to stand on their own’. “It’s been such a privilege to have the opportunity to encourage this group of dynamic young Africans, future artists, scholars and global citizens. To have the chance to collaborate with these amazing musicians was such an enjoyable experience, artists that embody the spirit of independence, community and innovation – I see long lasting relationships forged. To all the learners at the school, set your dreams high, there is greatness within you and I hope that you all achieve everything you set out to achieve.”, adds Msaki.

In support of the school anthem release, comes a visual story, a music video that offers a window into the collaboration between the artists and shows the creative process of the school song journey, as well as the iBhodi Trust micro-school learners who add their voices to the chorus of the school song filmed and recorded at UCT’s Sarah Baartman Hall. These creative individuals joined forces to create something unique, something that will resonate with the youth as they go on this new innovative journey of discovery and independence. A school song that not only inspires a new generation of learners, but a song that also inspires the world that we truly do own our future and in doing so, inspire others to make an impact.

Listen to ‘We Own The Future’ below and read more music news here.

The December Streets are starting off their new musical era with a bang! Their latest single ‘Same Faces’ became a radio hit here in...
Read more
News

Fans of the popular Lesedi Cultural Village will be thrilled to know that the destination is back in business as it officially reopens its...
Read more

The December Streets are starting off their new musical era with a bang! Their latest single ‘Same Faces’ became a radio hit here in...
Read more

Boundary-breaking dance artist and producer Alesso is back with new music as he joins forces with pop phenomenon Zara Larsson for a majestic new...
Read more
Awards

MTV announced the 2022 VMAs will air live and around the world in more than 170 countries on Sunday, August 28th. Returning to...
Read more
Lifestyle

The December Streets are starting off their new musical era with a bang! Their latest single ‘Same Faces’ became a radio hit here in...
Read more
News

Fans of the popular Lesedi Cultural Village will be thrilled to know that the destination is back in business as it officially reopens its...
Read more

The December Streets are starting off their new musical era with a bang! Their latest single ‘Same Faces’ became a radio hit here in...
Read more
Music

Warner Music South Africa announced their evolution to Warner Music Africa, the news was broken at an exclusive launch held on 11th May 2022...
Read more
Music

It’s easily one of the best local songs to have dropped in the past year so, unsurprisingly, newcomer Nomfundo Moh has hit a major...
Read more

Jason Goliath Is The Brand-New Voice Of Comedy Central

One of South Africa’s most loved comedians Jason Goliath has been announced as the brand-new voice of the home of 24-hour comedy, Comedy Central...
Read more
News

The fourth season of the popular Netflix reality series ‘The Circle’ has just premiered on streaming service Netflix and, this season, producers have spiced...
Read more
News

There’s plenty that’s unique about Africa — from being the world’s hottest continent to being home to more than 1.2 billion people spread over...
Read more
News

The DStv Content Creator Awards is in full swing, with registrations and entries flying in from across the country. In addition to shining a light on existing creators, there...
Read more
Lifestyle

Being a mom is hard work. When it comes to raising a child, your day is loaded with additional responsibilities that can be often...
Read more
Lifestyle

Mzansi is under two weeks away from the highly-anticipated Disney+ launch in the country. The streaming service already has close to 130 million subscribers...
Read more
Books

To be updated with all the latest news, offers and special announcements.